HERE ARE SOME PRESS SNIPPETS 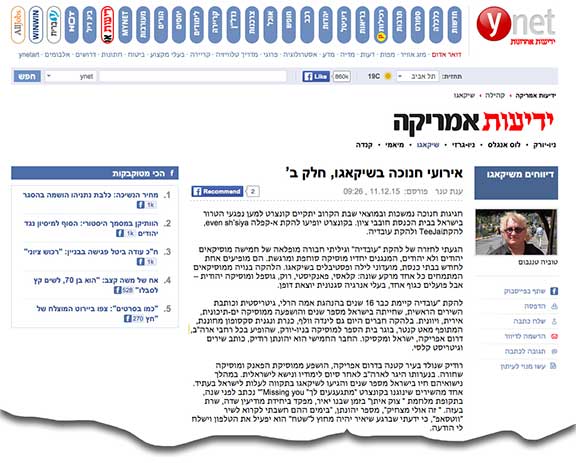 The Hannukah festivities continue, and this Saturday night there will be a concert for victims of terrorism in Israel at Kehilat Chovevei Tzion. The concert will feature the a cappela Even Sh'siya group, the TeeJai band, and the Ovadya band.

I attended an Ovadya rehearsal, and I found there a great bunch of musicians, both Jewish and non-Jewish, who together make sweeping, exciting music. They appear monthly at synagogues, nightclubs, and festivals in Chicago. The group comprises expert musicians, each from a different background—from classical to punk, rock, gospel, and Jewish music—but they work together as one, with exceptionally stylistic energy.

Ovadya, formed 16 years ago, is led by M Hurley, guitarist and lead songwriter, who lived briefly in Israel and who was influenced by Arabic, North African and Sefardic music. The group's current members include also Linda Wolf, gifted violinist and saxophonist, and

drummer Matt Kanter, a graduate of The School of Music in New York who has performed across the U.S., South Africa, Israel, and Mexico. The fourth member is stunning vocalist Terrence Price, and the fifth member is songwriter and classical guitarist Jonathan Rudick.

Rudick, who also played his own music that night, was born in a small city in South Africa, and was influenced by punk and African M’banqanga music. As a young man, he lived in Israel for several years, eventually making his way to Chicago. One of the songs he will play at the concert is “Missing You,” written a year ago during Operation Protective Edge, when Rudick's son Yair, a commander in a field intelligence unit, served in Gaza. “It's kind of funny,” Jonathan said, “at that time I thought about calling the song ‘WhatsApp,’ because I knew that the moment he was out of  ‘the field,’ he would turn his phone on and message me.”

This might not entirely possible, but O*VAD*YA's main inspiration could be the kaleidoscope. The band is very similar to the toy; each new twist reveals a vibrant blossom of unexpected potency. Classic Rock rubs elbows with Celtic harmonies. Jazz welcomes back Medieval lyres. Arabic flutes duel with electric guitars. A World music education in one night.

“Ovadya Hard to Define, but Easy to Rock”

They call themselves psychedelic world music with heavy Middle East influences. That much is evident.

But the members of Ovadya also say listeners might hear traces of System of a Down, Earth, Wind and Fire ... Alice in Chains. Heart also comes to mind, with the duel female vocals, and heavier Pink Floyd. None of it was influenced by anybody though.

Influenced "means a person tries to consciously emulate a sound," said guitarist and vocalist M Hurley, adding the only thing she ever tried to specifically emulate was popular sitar player Ravi Shankar. "There is so much good stuff out there that I love, but that doesn't mean we sound like it at all."

Hurley said the content of [many of] Ovadya's songs are based on the Psalms or liturgy and inspired by a spiritual worldview. "I took a song that was probably a thousand years old, no copyright, and re-rendered it," she said. "And some [of our]  songs are just about stuff of life."

MOLLY HURLEY WAS five when she discovered harmony. "They taught us a song in kindergarten," says the guitarist/singer/songwriter. "It sounded so good to me." As she walked home from school that day, humming the tune in her head, she thought, "Hey, why don't I do this?" And so she "figured out" what harmony was.

Years later, Hurley, who is adopted, learned that her maternal and paternal grandmothers were both music teachers. "There is something to be said for genetics," she says. "Music was just in me at an early age."

The first time she strummed a guitar, she says, it was "immediately beautiful" to her. After some intense pestering; Hurley's mother bought her an acoustic-a K-Mart special. Mom was duly rewarded.

"I drove my mother insane;' Hurley admits." For many years I didn't know-you were supposed to tune a guitar." That didn't prevent her from mastering her instrument." I just made tunes on some weird tunings and memorized them. My mother thought I was insane."

The upshot of this was that, aside from learning how to play in 11 different tunings (she also worked out the chords by ear), Hurley became an incredibly intuitive player. "My best stuff," she declares, "have been my mistakes, which I've incorporated into my playing. When I play electric I do some things you'll never see. They're blasphemous. I play with a capo—and a thumb pick. I do open tunings, and a—Nashville tuning on electric. That's the plus side of being self-taught."

Molly's use of open tunings has led people to compare her playing to that of Leo Kottke and Michael Hedges. Eric Johnson, Joe Satriani, Django Reinhardt and sitarist Ravi Shankar are among her favorite players. Her style is a melange of raunchy blues licks,  jazzy chordings, and folksy fingerpicking...

"Seven piece band from Chicago's way north side today, who sound a lot like a musical commune come to life. There's an

English- hippie- meets- summer- of- love vibe to the music of Ovadya, on their recently released disc, Driftless.

Ovadya is the name of the band—depending upon when you hear this, you can see them this weekend at The Note, March 19th their giggin' over there.

'Driftless' combines many eclectic styles. The instrumental work is professionally done, with interesting drums and percussion and occasional flashes of electric guitar work. My favorite cut is Driftless’ version of ‘Horeni’, which (if you close your eyes) could sound like an early outtake from Kaveret." [Israeli band]"

O*VAD*YA’s new CD "Driftless" is a clear representation of their unique musical style. Their music is original, intense, acoustic, and electric neo-psychedelic rock, flavored with distinct middle eastern and celtic influence, with a dash of jazz.

"Driftless" begins with the song Oasis, which is about finding "water in the burning sand." The best song on the album, by far is Blue Tubes, a psychedelic journey at the end of the world, looking back.

One of my personal favorites on the album is Kaddish, a song that the lead singer and vocalist M wrote about her mother’s death (Don’t worry, it’s encouraging!) In addition, the track Pulp Schiksa is just the band having fun and jamming, which is awesome.

Check them out at http://www.ovadya.net or download their music on the Apple iTunes Store.

The music of O*VAD*YA is complex and multi-layered stuff, with strands of different genres confidently woven together into a psychedelic-jazz-rock kind of thing that's usually found on the jam-band circuit. Led by M Hurley...on DRIFTLESS she showcases a band of musicians skilled enough to carry the genre changes and unusual time signatures and still produce tight songs that have energy.

Keep up with the doins. Your info is kept private.